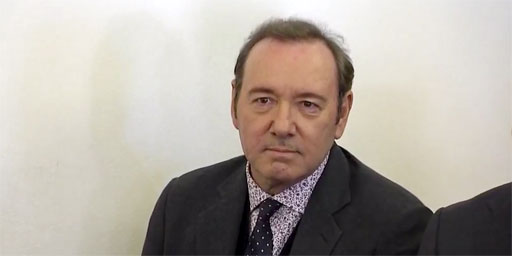 Local ABC affiliate WCVB reports the court filing alleging sexual assault by Spacey has been dismissed “with prejudice,” which bars the plaintiff from filing another case on the same claim.

From the court filing: “Plaintiff states that because no adverse party has served an answer or motion for summary judgment in this matter, Plaintiff is voluntarily dismissing this civil action.”

The lawsuit, filed on June 26, had sought a jury trial and damages for medical bills as well as emotional distress.

WCVB notes that the three year statute of limitations runs out this week.


Spacey still faces criminal charges in regard to the alleged sexual assault.

A hearing for the criminal case is scheduled for Monday.

Boston-based lawyer Marc Breakstone says the phrase “with prejudice” in the dismissal is a significant component to the case.

“I would say there is an overwhelming likelihood that there was a settlement and that the terms of the settlement will never be revealed because of a confidentiality provision,” Breakstone told the Boston Globe.

The veteran lawyer also surmises the criminal case could now be in jeopardy as well.

“I would say that the pros of Spacey will also come to a swift end because the [teenager] will not cooperate with the prosecution,” said Breakstone. “That’s the only plausible explanation for the sudden dismissal of the civil lawsuit.”

The allegations were made public in November 2017 by former local news anchor Heather Unruh, who claims Spacey groped her then-18-year-old son at the Club Car Restaurant in July 2016. Her son was employed there at the time as a bus boy.

According to documents filed in court, the teen asked to meet the Oscar winner after his shift ended at the restaurant. The young man admitted to investigators that he told Spacey he was 23-years-old.

Unruh says Spacey bought the teen several drinks, and eventually sexually assaulted her son by groping the teen’s leg. The court filing accused Spacey of unzipping the teen’s pants and groping him for approximately three minutes him without consent.

The teen admitted to police investigators that he didn’t say anything, attempt to stop Spacey, or walk away during the alleged assault.

During a December 2018 court hearing, Spacey’s legal team asserted the encounter was consensual.

Spacey’s attorneys point to the fact that the boy did not immediately report the incident to police. In fact, the teen wasn’t interviewed in person until a year later.

After the December court hearing, Spacey released a bizarre video via YouTube where he reprised his House of Cards character, Frank Underwood, urging the viewer to not rush to judgement.

“Despite even my own death, I feel surprisingly good, and my confidence grows each day that soon enough you will know the full truth,” said Spacey in the video.

The criminal case hit another snag last month when prosecutors told the court the teen’s cell phone had ‘disappeared.’ The prosecution reportedly used some text messages from the phone in justifying the charges against Spacey.

Spacey’s defense attorney, Alan Jackson, alleged some text messages had been deleted, and requested the chance to examine the phone.

The teenager’s lawyer, Mitchell Garabedian, told the court that the boy’s mother had given the phone to police investigators in December 2017, when the initial probe began, and neither the teen nor his parents “recall seeing the phone since.”

WCVB reached out to the teen’s mother, who declined to comment on the developments.

At the height of the #MeToo movement, Spacey was publicly accused of sexual assault and misbehavior by a series of men including actors Anthony Rapp, Guy Pierce, and Harry Dreyfuss, as well as crew members on the set of his Netflix series, House of Cards.

As a result of the wave of accusations, Spacey was dismissed from House of Cards and replaced in the film, All the Money in the World, after the movie had already been completed.

Additionally, he was dropped by his talent agent and publicist.