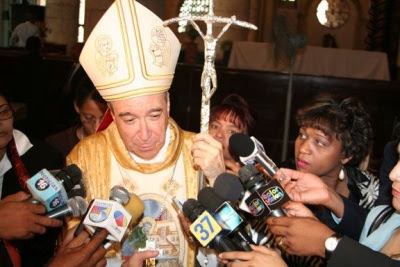 Here’s how the local the Catholic Church reacted this week:

Religious groups in the country have objected to Brewster solely because he’s gay. Perhaps the biggest offender has been Cardinal Nicolas de Jesus Lopez Rodriguez, the Roman Catholic leader in the country. At a press conference, Rodriguez called Brewster a “maricón,” which is usually translated as “faggot.” Not content to leave it at that, the Cardinal’s sidekick, Monsignor Pablo Cedano decided to chime in.

“I hope he does not arrive in the country because I know if he comes he is going to suffer and will have to leave,” Cedano said. He called it “a lack of respect” that Obama “sent … a person of this kind as an ambassador,” adding, “[W]e don’t despise the person.”

Of course, why we would EVER think that?

The nominee, James “Wally” Brewster, must still be confirmed by the Senate and is the latest
in a flurry of appointments of gay Americans for ambassadorships by the
Obama administration. Five others were named just in the last month. Only three openly gay ambassadors have served before them.