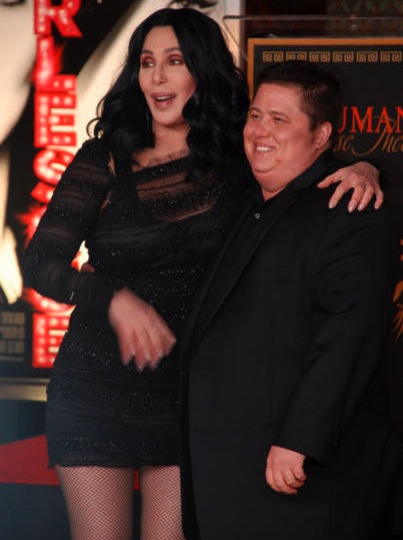 Cher is lashing out at haters who are making noise about Chaz Bono appearing on Dancing With the Stars.

He is the first transgender competitor on the ABC show.

On Twitter, Cher wrote:
“lovelies! Chaz is Being Viciously Attacked on Blogs & Message boards about being on DWTS!This is Still America right ? It took guts 2 do it. Bet VAST MAJORITY of People will LOVE CHAZ on DWTS ! Chaz isn’t exactly the “Gotta Dance Gotta Dance” kinda Guy”

Dancing fans have posted both supportive and unsupportive comments about Chaz. One used the word “disgusting” Another wrote: “I never and mean NEVER watch DWTS, but will this season to support/vote for (Chaz).”

One Million Moms, a group whose goal is to fight the “filth many segments of our society, especially the entertainment media, are throwing at our children,” is urging people to “email ABC Network and let them know that we will not tolerate these subjects being forced into our homes.” A note on the group’s site says the casting of Chaz Bono and Carson Kressley “is completely unacceptable and Christians should not watch the show, no excuses!”

Chaz tweeted back at his mom last night, saying:
“Thanks for all your support mom. The haters are just motivating me to work harder and stay on DWTS as long as I possibly can.”
(via usatoday.com)