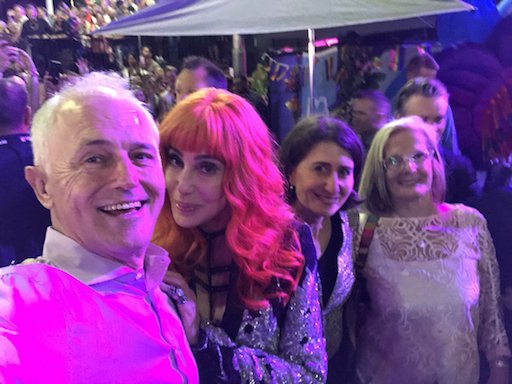 As I recently reported, international superstar Cher thrilled the crowd of over 300,000 at the annual Sydney Gay & Lesbian Mardi Gras this past weekend.

Not only did she dazzle the audience with a 20 minute set at the huge after-party event, she showed up at the Parade as well.

The only hitch in the whole magilla was a selfie she took with Prime Minister Malcolm Turnbull during the parade.

It appears Cher was not up to speed on Australian politics and didn’t realize that it was Turnbull who put the entire country through the recent mail-in survey on marriage equality before he would allow legislators to take up the issue.

As we all know know, same-sex marriages happily began ‘down under’ in January.

But folks took the iconic Oscar winner to task for honoring Turnbull with a selfie.

In the end, Cher offered a sincere mea culpa adding “Guess that’s why I have FEW Friends Who Are Politicians.”

Check out the tweets below.

Welcome to Sydney, Cher! @GladysB Lucy and I and all your fans thrilled to be with you at the 40th Mardi Gras & first since Australia achieved marriage equality. pic.twitter.com/EIYDaq2OTG

I wonder if @cher knows just how truly terrible @TurnbullMalcolm and his party have been to the LGBTIQ community.. pic.twitter.com/Wp39iWqXoP

I’m not sure what you mean.
The Man I Talked To Seemed PROUD OF EVERYONE AT THE PARADE. Am I Missing. Something⁉️
The Man I TALKED Could Be Reasoned With,The Man I Talked TO Believes In Equal Rights for ALL OF HIS PPL.THE MAN I TAKED TO WILL LISTEN &
HEAR”& 🐝COMPASSIONATE

The man you talked to is a liar. He illegally detains refugees/asylum seekers who are PoC in off-shore concentration camps were they are tortured, abused & killed. He speaks only in support of trump. He ensured LGBTIQ people were taunted and abused for months last year. Sorry. https://t.co/WrVG3QINP0

Am so sorry. Guess that’s why I have FEW Friends Who Are Politicians.He Seemed Very Open & excited about MARDI
GRAS,AND LGBT COMMUNITY.