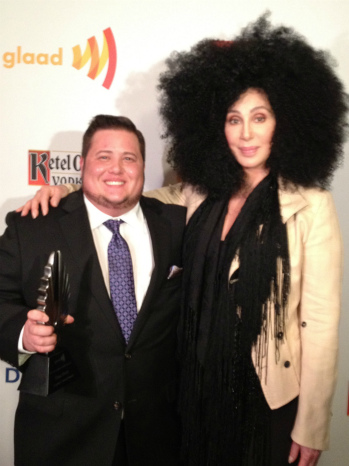 Chaz Bono, whose transition from female to male was chronicled in Becoming Chaz, was joined on stage at the Westin Bonaventure in Los Angeles by directors Fenton Bailey and Randy Barbato to pick up the prize for outstanding documentary for the OWN release.

In addition, Bono was also honored with GLAAD’s Stephen F. Kolzak Award,
which is presented annually to an openly lesbian, gay, bisexual or
transgender media professional who has made a significant difference in
promoting equality. Cher presented her son with the award and was joined
on stage by Rep. Mary Bono Mack.

The Hunger Games star Josh Hutcherson
received GLAAD’s Vanguard Award, which is presented to media
professionals who have increased the visibility and understanding of the
LGBT community.