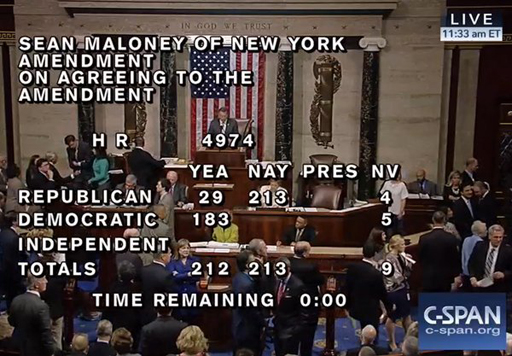 For a brief period of time, House Democrats were celebratory in the belief that they had passed an amendment to a defense authorization bill that would have prevented federal contractors from federal jobs if they discriminate against LGBTs.

But shortly after the vote showed the amendment had passed, the numbers began to change even though it seemed the clock had run out on voting.

It was an unruly scene on the floor, with Democrats chanting “shame!” after GOP leaders just barely muscled up the votes to reject, 212-213, an amendment by Rep. Sean Patrick Maloney (D-N.Y.) that would have effectively barred federal contractors from getting government work if they discriminate against the LGBT community.

At one point, a monitor in the House gallery showed there were 217 votes supporting the legislation, eliciting cheers of joy from Democrats who thought the measure might actually pass. But over the course of about 10 minutes, those votes suddenly dropped one by one to 212 — and the amendment failed.

A number of lawmakers from western states, who originally voted yes, changed their votes. According to a list tweeted out an hour after the vote by House Minority Whip Steny Hoyer’s (D-Md.) office, they included: Reps. Darrell Issa (Calif.), David Valadao (Calif.), Jeff Denham (Calif.), Greg Walden (Ore.), Mimi Walters (Calif.), David Yong (Iowa) and Bruce Poliquin (Maine). Their offices have not yet responded to request for comment.

Not only did GOP vote against #equality but those who switched votes didnt have courage to do so openly https://t.co/8f4PkUnfX4 #LGBT

The Republican Empire Strikes Back to Allow Discrimination Against LGBT Americanshttps://t.co/bZmGhIPNDA