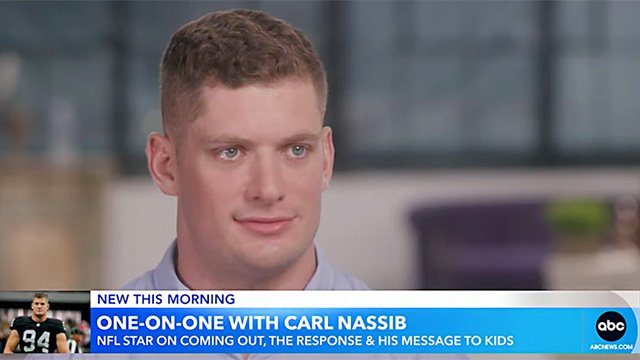 A year after becoming the first active out player in the NFL, Carl Nassib sat down for a chat with Good Morning America’s Michael Strahan. Throughout the chat, Nassib was unfiltered and candid about how he arrived at his decision to come out, the moment before, and how he feels today.

After looking back at Nassib’s Instagram video post wherein he came out to his followers, Strahan asked about Nassib mindset before he hit the Post button.

“I like, stared at the phone for an hour,” said Nassib. “Just looking at it, and trying to hype myself up. And the last thing I said was ‘for the kids’ – and I pressed Post.”

Here’s Nassib’s coming out video to the world:

While he’d come out to family and close friends years ago, Nassib says he wanted to “stay ahead of the narrative, I just wanted to own the story and make sure I did it on my terms.”

“One of my biggest fears was that I would only be remembered for being gay,” explained the 29-year-old NFL veteran. “I just really wanted to show that it doesn’t matter, your sexual orientation.”

He also shared his coming out was met with “the most incredible support” from his Las Vegas Raiders teammates.

Strahan asked Nassib how we, as a society, can get to a point where coming out is unnecessary. Nassib replied:

“When people come out, they’re coming out of the closet because they’re afraid. They’re afraid they’re going to have a negative impact on their life, on their relationships, on their job. I just hope that one day we don’t have those fears. And I hope I can be a positive push in that direction.”

Quoting statistics from The Trevor Project, Strahan notes that 45% of LGBTQ youth contemplated suicide in the last year. But – those who had supportive family members attempted suicide at less than half the rate of those who felt low or moderate social support.

Looking to the horizon, Nassib says we’re “making strides in a positive direction.” But he quickly adds in a sober tone that “it won’t be a perfect road, and we just have to continue the course, and make sure we do it from a place of love and not animosity.”

GMA also made a point to mention Nassib’s $100,000 donation to The Trevor Project when he came out in 2021, which was then matched by the NFL.

Even though he was released by the Raiders last month, and thus unemployed, Nassib announced he would donate another $100,000 to The Trevor Project in matching funds for those who choose to donate the organization now.

Although he faces the upcoming football season as a free agent, Carl Nassib says he only has “so much love for Las Vegas.” He adds that he believes there will be more NFL opportunities in the future because he’s still “got a lot in the tank.”

Watch the full interview with Good Morning America below.