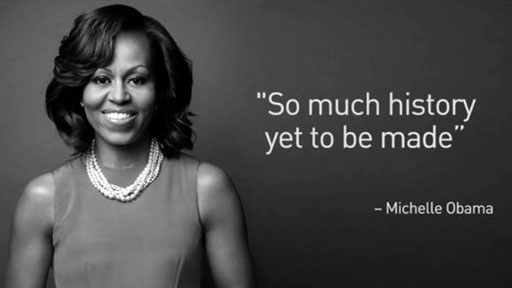 A new ad from a political action committee is focused on the possibility of Hillary Clinton making history as the first woman president of the United States.

The ad — titled Man Smart (Woman Smarter) and featuring the song of the same name — opens with a shot of Michelle Obama and her quote: “So much history yet to be made.” It then rolls through a “who’s who” of pioneers in women’s political history including the first woman Supreme Court Justice, Sandra Day O’Connor, the first woman vice presidential candidate, Geraldine Ferraro, the first woman Speaker of the House, Nancy Pelosi, and the first African-American woman secretary of State, Condoleezza Rice.

The ad then pauses on a still of an open presidential lectern in the White House with the words “It’s time” suspended above. Next, we see a black-and-white still of a smiling Clinton. “Vote Hillary. #FirstWoman,” the ad concludes.