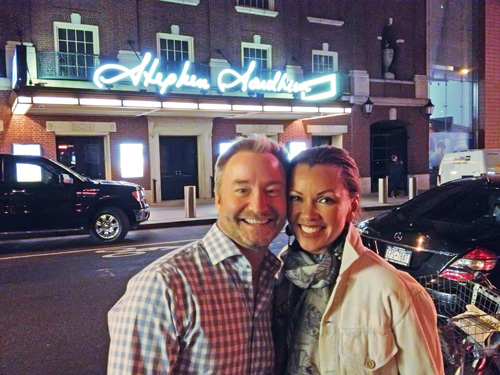 Michael and I saw the beautiful new production of A TRIP TO BOUNTIFUL last night starring Cicely Tyson, Cuba Gooding Jr. and the FAB Vanessa Williams.

The nominations for awards are pouring in for the production, and the box office is doing hefty business as the theater community welcomes Cicely Tyson back to Broadway for the first time in 30 years.  The production also marks Cuba Gooding Jr’s Broadway debut and Vanessa’s return to the Broadway stage since her gorgeous performance in SONDHEIM ON SONDHEIM three years ago.

THE TRIP TO BOUNTIFUL is Horton Foote’s masterpiece about memory, mortality and the undeniable, universal yearning for home.

The Wall Street Journal calls TRIP, “is unforgettably excellent. I’ve never been more deeply moved by a theatrical production of any kind.”

The Associated Press says “The casting here is splendid. Not only is Tyson feisty and funny and glowing with inner light; Vanessa Williams is politely savage as her preening daughter-in-law, icy without becoming a dragon. Cuba Gooding Jr. nails the kind man unfortunately caught in the middle of these two women. The care and love all the creators have for this play pours out from the stage.”

EW wrote about the show “Tyson gives an awe-inspiring performance. She sings, she dances, she does everything but cartwheels. She’s well matched by Vanessa Williams – wickedly funny as her bossy daughter-in-law.”

As regular readers of TRR know, I’ve known Vanessa for years; and I am very proud of Vanessa for her work in the play.   Her role as “Jessie Mae Watts” is deceptively difficult as she sets the tone and environment that incites Cicely Tyson’s character to head home to Bountiful. Vanessa drives the entire beginning of the play with constant business and energy.  And she brings the pitch perfect touch of humor to the role, as only Vanessa can.

Make sure you see A TRIP TO BOUNTIFUL at the Stephen Sondheim Theater on Broadway.  I loved it, as did the sold-out audience I saw it with.