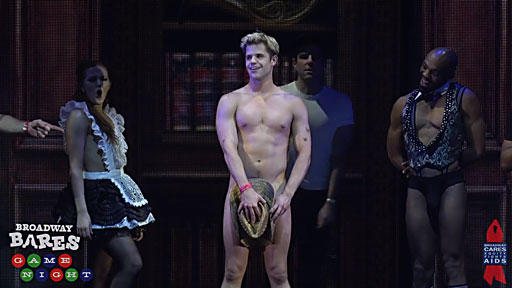 The annual fundraiser Broadway Bares crushed it once again Sunday night as Broadway’s hottest dancers and the production crew came together to raise funds for Broadway Cares/Equity Fights AIDS.

The dancers and choreographers have spent weeks not only learning and perfecting the scintillating numbers performed last night but campaigning online for donations.

Directed by Nick Kenkel, the show featured sexy riffs on games like Battleship, Pictionary (“Striptionary”), Candy Land, Operation, Old Maid (who proved she was anything but), and more.

For each wrong answer, young Charlie had to remove an article of clothing until the penultimate moment when Zach Quinto ripped off Carver’s thong to screams from the packed-house.

Congrats to Tom Viola of Broadway Cares and Tony Award winner and creator of Broadway Bares, Jerry Mitchell, on another incredible night to help others!

Watch a few highlights below.