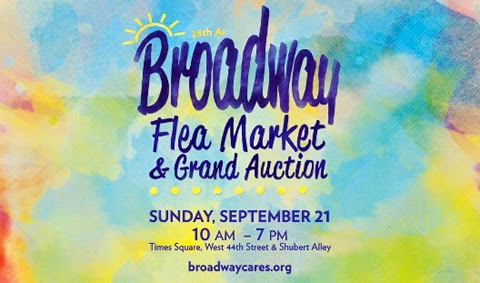 Be a part of the biggest day for Broadway fans as the 28th Annual Broadway Flea Market & Grand Auction returns this fall to Times Square, Shubert Alley and West 44th Street.

The event is scheduled for Sunday, September 21 from 10am-7pm.

The Grand Auction, which includes a series of silent auctions throughout the day culminating in an exciting live auction, features dozens of fascinating lots, including walk-on appearances in Broadway’s biggest hits lunches with Tony Award winners, VIP tickets to Broadway opening nights and musical phrases handwritten by Broadway’s best composers and lyricists.

At the Autograph Table & Photo Booth, hosted once again by the inimitable Jim Caruso, fans have the opportunity to get autographs or pose for pictures with their favorite stars from Broadway and Off-Broadway in exchange for donations to Broadway Cares.