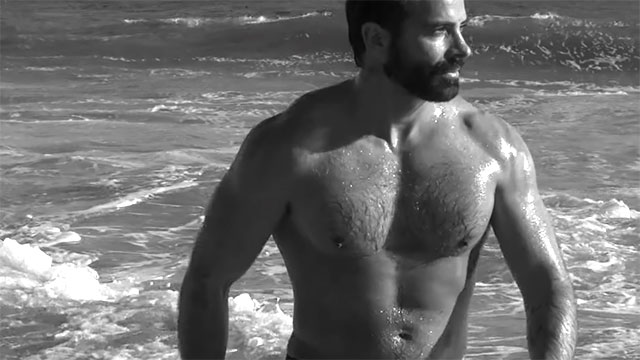 For several years now, TV audiences in cities across the country have seen the sexy ad spots for personal lubricant Boy Butter during episodes of RuPaul’s Drag Race.

Produced by StrawHat Productions, the moody 30-second video is reminiscent of iconic 1990s fragrance and fashion campaigns. Shot in black and white, we watch the oh-so-woofy Facundo Rodriguez and Jerreth Ludwig enjoy a languid, romantic afternoon on El Matador Beach in Malibu, California.

“Freedom to me means fearlessness,” a voiceover says as the men frolic leisurely in the waves. “It means expressing myself authentically and loving however I choose.”

Donna Feldman, co-founder and producer of StrawHat Productions, says in a statement, “The love shared amongst the men offers a twist to the way the audience of the sport views displays of masculinity.”

Boy Butter founder Eyal Feldman hopes “the ad encourages you to find solace in being yourself, and promotes the message of loving whomever you choose, freely.”

In addition, the commercial will play during new episodes of Keeping up with the Kardashians, The Real Housewives of Beverly Hills & NYC, 90 Day Fiance, Million Dollar Listing on E!, Bravo, TLC and LOGO in the USA and Season 6 of RuPaul’s All Stars in Canada on OutTV.

Founded in 2003, Boy Butter Lubricants manufactures both oil based and water based personal lubricants that are long lasting, organic, hypo-allergenic, and washable.

Follow Facundo Rodriguez and Jerreth Ludwig on Instagram. And you can check out Boy Butter’s previous ad spots here and here.