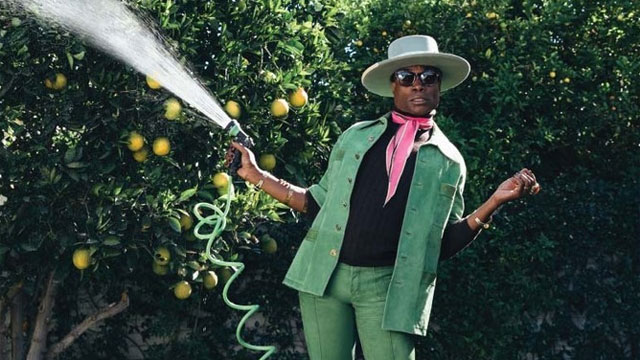 In a new interview for Palm Springs Life Magazine, Emmy Award winner Billy Porter (Pose) spills the tea on how he’s traversing the terrain of his ever-increasing celebrity.

Speaking to writer Jeremy Kinser, Porter covers a wide range of topics from EGOT possibilities (“Where’s my James Bond theme? That will get me my EGOT!”) to upcoming film roles in Sony’s musical adaptation of Cinderella (“I will be playing my fabulous self”) and the female empowerment comedy starring Tiffany Haddish and Selma Hayek, Like a Boss(“Praise the Lord, I got a really good part!”) and more.

Porter credits his theater background (Tony Award for ‘Best Actor in a Musical’ in Kinky Boots, thank you very much) for prepping him with the stamina to keep up with the current onslaught of opportunities

After working in Broadway productions like Five Guys Named Moe and Miss Saigon, it was during his tenure in the 1994 revival of Grease (where he served up a show-stopping “Beauty School Dropout”) that he was kissed by the visceral, gut-wrenching genius of the AIDS-era drama, Angels in America.

“I thought, how do I go from playing the teen angel with 14 inches of orange rubber hair on my head, prancing around like Little Richard on crack, to that?” says Porter. “That play was the turning point for me in choosing a different direction in my life and ending up where I am sitting in front of you today. This is the life I wanted for myself. I’m doing it on my terms, and it was Angels in America that launched that journey for me.”

Inspiration can become a driving force. A force so undeniable it’s no surprise Porter would find himself cast in the critically-acclaimed 2010 off-Broadway revival of Angels, in the very role that sparked so deeply inside him.

In hindsight, Porter’s journey from Angels in America to the ground-breaking FX series Pose makes total sense. The straight-talking ‘Belize’ in Angels could have easily been a cousin to the no-holds-barred ‘Pray Tell’ of Pose.

Steven Canals, co-creator of the hit FX series, says he believes Porter’s irrefutable authenticity on the show is responsible, in part, for the broad appeal of the show which includes a sizeable straight, white female audience.

“I think ‘Pray Tell’ is one of the characters on the show that you wish you knew in real life,” he shares. “Many folks who watch the show have probably known some version of that character. I think a lot of our viewers, regardless of their identity, are seeing their own history, their own experience on the screen.”

Canals adds that on set, Porter is something of a role model to the cast in regard to navigating “this crazy business with class and with grace, and patience.”

Amid all this success, it’s not hard to imagine the stresses of balancing fame and travel alongside domestic life with husband Adam Smith. Initially, Porter demurs: “Let’s move past that question.”

But after a pause, Porter shares: “We’re finding the balance. It’s been a rocket ship liftoff, and it leaves the subject and the people around the subject wherever they’re at. It’s a lot. I’m in a space of trying to figure out how to balance it.”

Porter also spills the tea on some new film projects looming on the horizon.

The actor and Canals are in the process of trying to secure the rights to the life story of R&B recording artist Donny Hathway (“This Christmas,” “A Song For You”), who struggled with mental health issues before falling to his death from the 15th floor of New York City’s Essex Hotel.

A second project, currently in early development, is a big-screen biopic of iconic gay author James Baldwin, who Porter quoted while accepting this year’s ‘Outstanding Lead Actor in a Drama Series’ Emmy Award.

“Those are the people I should be playing,” Porter tells Palm Springs Life. “I’m so thrilled that I’m at the position now where people want me to play those people.”

We smell an EGOT in someone’s future 🙂

It’s a great read accompanied by a – no surprise – gorgeous photoshoot by Aaron Feaver.

Click over to Palm Springs Life for the full cover story by Jeremy Kinser.