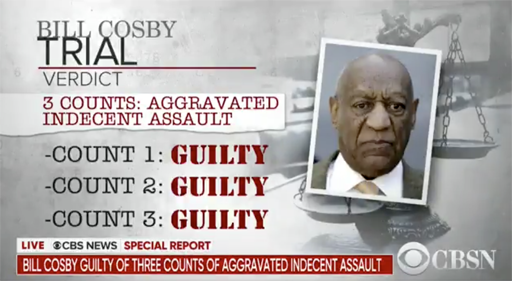 The jury in Bill Cosby’s sexual assault retrial has found the comedian guilty of sexually assaulting a former Temple University women’s basketball administrator at his suburban Philadelphia mansion in 2004. Cosby was charged with three counts of felony indecent aggravated assault. He faces 10 years in prison on each count.

The jury at Cosby’s first trial deliberated for more than 52 hours over six days last year without reaching a verdict.

Jurors in this trial began deliberating Wednesday in Norristown, Pa. after prosecutors in closing arguments portrayed the 80-year-old former TV star as a serial predator who drugged and molested the woman, Andrea Constand, 14 years ago.

Five other women were called to the witness stand and testified the same thing had happened to them.

According to court records, the 3 assault charges were penetration with lack of consent, penetration while unconscious, and penetration after administering an intoxicant.

After the verdict, Cosby apparently began cursing at the prosecutor in the courtroom.

JUST IN: Bill Cosby has been found guilty on all 3 counts of aggravated indecent assault; he faces up to 30 years in prison https://t.co/hzRvpUeRwv pic.twitter.com/wt34a3W93c

BREAKING: Bill Cosby lashes out at prosecutor in expletive-laden tirade in courtroom after conviction in sexual assault retrial.

So for those who are still saying Cosby is a good man, remember that the popular television role he played was a character — nothing more, nothing less.