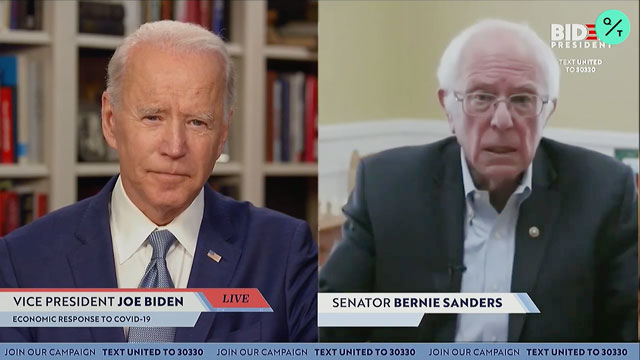 In a joint live stream today, Sen. Bernie Sanders (I-VT) officially endorsed former Vice President Joe Biden for president and he asked his supporters to do the same.

“Today I am asking all Americans … to come together in this campaign to support your candidacy,” Sanders told Biden.

In throwing his weight behind his former rival, Mr. Sanders is sending an unmistakable signal that his supporters — who are known for their intense loyalty — should do so as well, at a moment when Mr. Biden still faces deep skepticism from many younger progressives.

The two men appeared via live stream on split screens — each on each other’s live streams — talking to each other. “We need you in the White House,” Mr. Sanders said to Mr. Biden. “And I will do all that I can to make that happen.”

Mr. Biden said: “I’m going to need you. Not just to win the campaign, but to govern.”

We must come together to defeat the most dangerous president in modern history. I’m joining @JoeBiden‘s livestream with a special announcement. https://t.co/AC3zh3ChX3

Good for Bernie!!! It takes class and courage to endorse your opponent after a hard fought election.

Together, Joe Biden and Bernie Sanders – and all caring elected officials and Americans – will lead us to victory in the most important election of our lifetimes. 💪💪💪

Bernie Sanders, as he endorses Joe Biden: “We have to make Trump a one-term president and we need you in the White House.”

On Sunday, however, the Democratic Socialists of America tweeted in no uncertain terms they will not support Biden. #smh

We are not endorsing @JoeBiden.