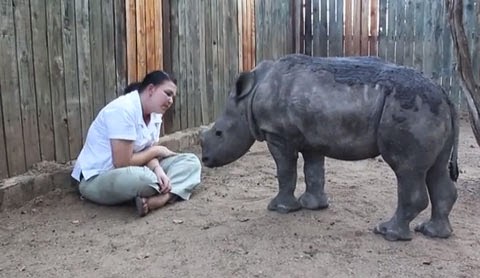 This adorable baby rhino is being cared for by the Hoedspruit Endangered Species Centre after being orphaned earlier this year when its mother was tragically poached.

They’ve named the little one Gertjie.

From the HESC blog:

We took custody of a very special animal last night. A 3 month old baby rhino, anticipated to have been born around the 19th February, was brought to the HESC after being found next to his dead mother who had been tragically and brutally poached for her horn.

It was a devastating sight, as the tiny animal would not leave her side, and was crying inconsolably for her.

According to the HESC, rhinos will be extinct by 2025 if they continue to be poached at the current rate which has increased by an incredible 3346%.

The HESC is accepting donations to help pay for caring for little Gertjie.

Check out the short video of Gertjie enjoying snuggle time.