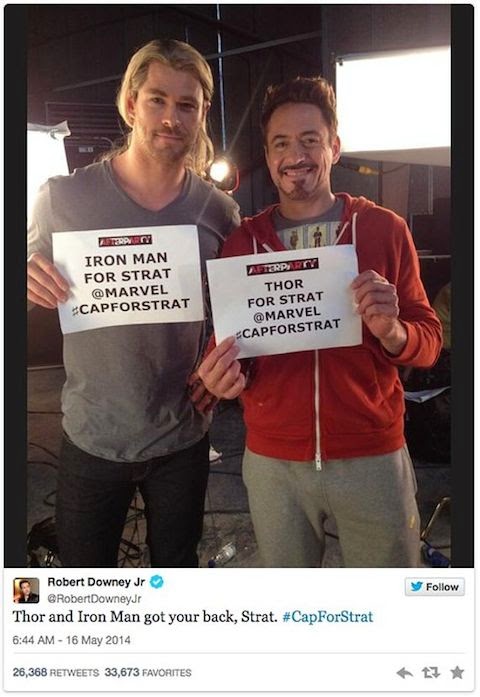 Stratford Caldecott, dying from prostate cancer, had a last dying wish – one that became one of the greatest superhero gifts ever.

Stratford, a big Marvel comics fan, wanted to live long enough to be able to see The Avengers: Age Of Ultron. So his daughter Sophie, with nothing to lose, posted the following request on her personal blog:

“We’re going to try and get in touch with Marvel to ask if they can fulfill dad’s dying wish by sending us a copy of the film for him to watch at home. But I think we can go further than that. We’re also going to tweet the Avengers actors and see if they will take a picture of themselves holding a sign saying ‘Captain America/Thor/Iron Man [insert name of character here] for Strat!’ so that we can surprise him with their messages of support and encouragement.”

So what happens next?

Shortly thereafter, a Marvel executive arrived at her door, followed by Captain America: The Winter Soldier screenwriters Christopher Markus and Stephen McFeely with a promise to deliver a copy of the movie to her dad.

But – it gets better. Look below…

Heroes do sometimes appear in the nick of time.