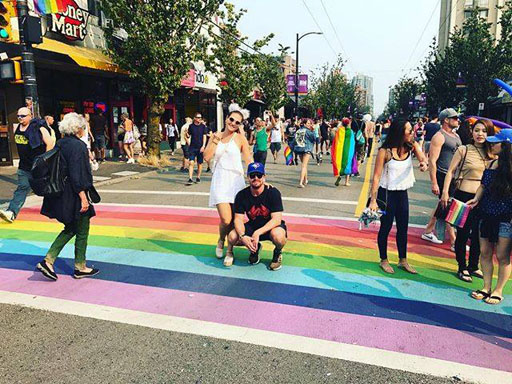 ARROW star Stephen Amell posted two pics on Facebook yesterday from his weekend in Vancouver where he took in part of the local Pride festivities with friends.

This morning, Amell was appalled to find he had haters hating on the fact that he merely POSTED PHOTOS from a Pride event.

While most were supportive, several were definitely haters. At this writing the post has over 34,000 reactions.

The TV super-hero posted this in response:

Facebook! What’s happening! So I’m scrolling through my page this morning and I was really taken aback by some of the back and forth commentary after I posted two photos from the Pride Parade / Festivities yesterday in Vancouver. The vast majority were positive, but a laughable amount were negative. I had a fantastic weekend in Vancouver with my wife and friends, met some terrific people and more than anything just tried to soak in all the positive energy from people living their best lives. If I’m in Vancouver next year I won’t just go back, I’ll walk in the parade. So for everyone in their negative pants: Go be on the wrong side of history on somebody else’s Facebook page. xo

You basically had the run-of-the-mill, common hater complaints:

Why do you have to shove this down my throat? Why do TV stars think they get to have an opinion on gay people?

Good on Amell for standing up to the haters.

I'm following this guy to the end of the parade and taking his balloon wings. Hopefully he watches Arrow. pic.twitter.com/b9iDtVPjDD— Stephen Amell (@StephenAmell) August 6, 2017