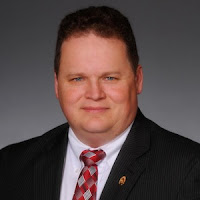 Nate Bell, a GOP state representative in Arkansas decided to take to Twitter yesterday and insult the brave people in Boston as “cowering” in their homes in the aftermath of the Boston Marathon bombing. Not smart.

Bell quickly deleted the Tweet but the world saw it.  Funny thing about the internet….

Bostonian Brian Folkins-Amador hits the right note in his Facebook response. This is pretty much the perfect response to an idiot.

Arkansas State Representative Nate Bell tweeted, “I wonder how many Boston liberals spent the night cowering in their homes wishing they had an AR-15 with a high-capacity magazine?”.

I’d like to answer that: Probably none. Believe it or not, we Boston liberals slept just fine, thank you. Unlike you, we don’t need a gun by our side to feel unafraid. Unlike you, apparently, we know that no gun, no matter how powerful, would have done a bit of good in preventing the Boston Marathon bombing. Do you really believe that guns would have given you, or anyone else, the prescience to know that these kids were going to plant bombs? And if it had been so, what would you have done? Shot two people in the middle of a huge crowd of spectators?

I slept fine last night, even without a gun by my side, and I’ll tell you why. Because I saw how our law enforcement agents and elected officials responded immediately to a crisis, taking extraordinary measures to protect the public, to bring the bombers to justice, and to assure people that everything possible was being done to keep us safe. I saw how the state and federal governments, the media, and the public cooperated to create the space for law enforcement to do its job. I saw how the second suspect was captured alive after countless human hours of patient, painstaking study of the available evidence. In short, I saw how civilization triumphed over evil, how a rational, coordinated effort limited the potential loss of human life. I saw how my city, which I, as a transplant, have often seen as cold, unfriendly and uncaring, pulled together in a way I would have thought unimaginable, with a sense of common purpose that even now brings tears to my eyes. I saw how this common effort prevented further loss of life. I don’t need a gun. If you think that your firearms would have made you any safer in our situation, you’re entitled to your opinion. But don’t assume we share it. We happen to believe that there are stronger protections than lethal weapons. Mr. Bell, Wayne LaPierre, Alex Jones and other gun worshippers, maybe you would cower in your homes if you didn’t have firearms by your sides. We Boston liberals are made of stouter stuff than that.

Bell responded to an onslaught on Facebook after his idiocy and “apologized” for his timing of the tweet, but not for referring to fellow Americans as “cowering:”

I would like to apologize to the people of Boston & Massachusetts for the poor timing of my tweet earlier this morning. As a staunch and unwavering supporter of the individual right to self defense, I expressed my point of view without thinking of its effect on those still in time of crisis. In hindsight, given the ongoing tragedy that is still unfolding, I regret the poor choice of timing. Please know that my thoughts and prayers were with the people of Boston overnight and will continue as they recover from this tragedy.

Over 8,700 comments on his Facebook apology, with the majority criticizing his insensitivity.