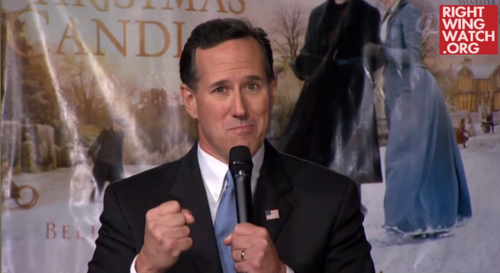 The former senator and presidential candidate told host Anne Cori, Eagle Forum founder Phyllis Schlafly’s daughter, that supporters of marriage equality have “devalued marriage” and “divorced marriage from any meaning beyond a romantic relationship,” while Cori lamented the “celebration of single mothers.”

He also warned of polygamy: “If marriage is simply a romantic relationship between two people, and by the way, that’s what it’s devolved to the minds of a lot of Americans, if that’s all that marriage is well then it’s hard to make the argument that any two people or any three or four people shouldn’t be able to get married.”