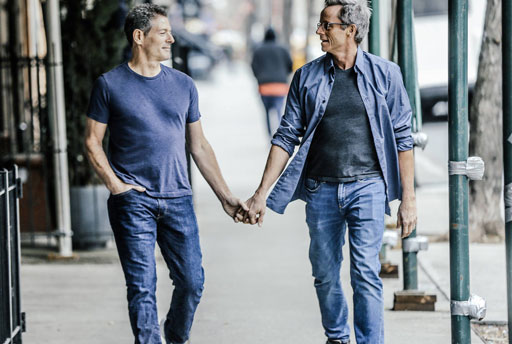 AFTER FOREVER is the story of Brian, played by Kevin Spirtas (Days of Our Lives) and Jason, played by Mitchell Anderson (Doogie Howser, Party of 5), a “50-ish” New York City gay couple, who have it all – until they don’t.

The 8-episode first season follows them and their friends through a journey of love, loss and moving on.

Speaking to The Advocate last year, Slade shared that the depiction of 35+ year-old gay men in series television has been missing in his estimation.

“We as gay men, after we’re no longer 35, we tend to disappear from popular culture until we’re Christopher Plummer — asexual down the hall with a cat,” Slade told The Advocate.

And co-creator Spirtas underscored the universality of the series’ love story.

The series’ 2019 Daytime Emmy nominations include:

AFTER FOREVER was also honored with a writing nomination for Michael Slade & Kevin Spirtas last month at the 2019 Writers Guild Awards in the Original Short Form New Media category.

You can watch the first episode of the series here for free and check out my interview with co-creator and lead actor Kevin Spirtas below.

In related Daytime Emmy Awards news, veteran daytime drama actor Greg Rikaart picked up a 2019 Best Supporting Actor nomination as well for his work as “Leo Stark” on Days of Our Lives.

Already a Daytime Emmy Award winner for his longtime role as “Kevin Fisher” on The Young and the Restless, should the 42-year-old actor win, he would become the first to win Best Supporting Actor for a gay role, and the first openly gay actor to win for a gay role in any category.

The 46th Annual Daytime Emmy Awards will be held May 5 at the Pasadena Civic Auditorium.