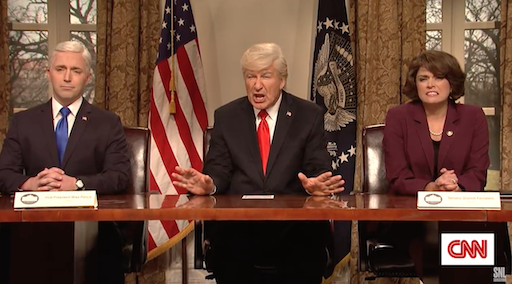 But the segment was non-stop Baldwin as he skewered the current commander in chief.

Baldwin’s “Trump” began by addressing gun control: “It’s clear something has to change. We have to take a hard look at mental health, which I have so much of. I have one of the healthiest mental. My mentals are so high, but we have to respect the law. Believe me, no one love the Second Amendment and due process more than me, but maybe we just take everyone’s guns.”

On the announced departure of close adviser Hope Hicks: “She’s like a daughter to me. So smart, so hot. You know, I hate seeing her go but I love watching her walk away. Boom bada boom…”

On Trump’s unique governing style: “I said I was going to run this country like a business. That business is a Waffle House at 2AM. Crazies everywhere, staff walking out in the middle of their shift, managers taking money out of the cash register to pay off the Russian mob.”

And to wrap things up, Kate McKinnon’s Jeff Sessions stands up on his own “hind legs” to let the Trumpster know he’s not going anywhere: “I’m like skunk stink on a bird dog. I linger.”

Baldwin was perhaps keeping a promise he made this week as he traded barbs with Trump via Twitter.

Although Trump attacked Baldwin and his “dying mediocre career,” it was Baldwin who delivered the coup de grâce: “Agony though it may be, I’d like to hang in there for the impeachment hearings, the resignation speech, the farewell helicopter ride to Mara-A-Lago. You know. The Good Stuff. That we’ve all been waiting for.”

Alec Baldwin, whose dying mediocre career was saved by his terrible impersonation of me on SNL, now says playing me was agony. Alec, it was agony for those who were forced to watch. Bring back Darrell Hammond, funnier and a far greater talent!

Agony though it may be, I’d like to hang in there for the impeachment hearings, the resignation speech, the farewell helicopter ride to Mara-A-Lago. You know. The Good Stuff. That we’ve all been waiting for.