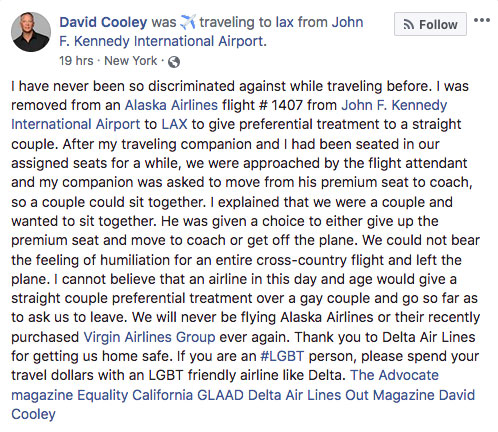 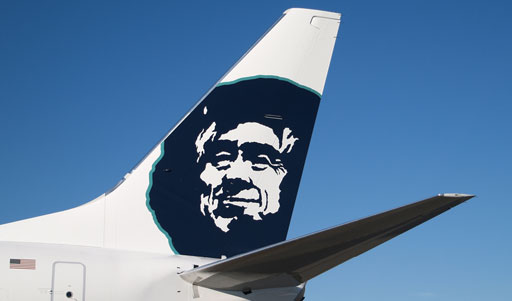 UPDATE: I personally spoke with Bobbie Egan, External Communications Director for Alaska Airlines, this morning who told me, “I think this is an incident of human error. It was a mistake, and it shouldn’t have happened.”

“We mistakenly booked two people in one seat. We are deeply sorry for the situation, and are investigating the details while communicating directly with the guests involved to try and make this right. Alaska Airlines has a zero-tolerance policy for discrimination of any kind, and our employees value inclusion for our guests and each other.”

After boarding an Alaska Airline flight from New York City’s JFK airport to Los Angeles, a gay businessman and his partner were approached by a flight attendant and his companion was asked to change seats.

The man, David Cooley, is the founder and CEO of the prominent West Hollywood nightclub, The Abbey.

Dave Cooley shared on Facebook, “I have never been so discriminated against while traveling before. I was removed from an Alaska Airlines flight # 1407 from John F. Kennedy International Airport to LAX to give preferential treatment to a straight couple.”

“After my traveling companion and I had been seated in our assigned seats for a while, we were approached by the flight attendant and my companion was asked to move from his premium seat to coach, so a couple could sit together.

“I explained that we were a couple and wanted to sit together,” Cooley continued. “He was given a choice to either give up the premium seat and move to coach or get off the plane.”

“We could not bear the feeling of humiliation for an entire cross-country flight and left the plane.

“I cannot believe that an airline in this day and age would give a straight couple preferential treatment over a gay couple and go so far as to ask us to leave. We will never be flying Alaska Airlines or their recently purchased Virgin Airlines Group ever again. Thank you to Delta Air Lines for getting us home safe.

“If you are an #LGBT person, please spend your travel dollars with an LGBT friendly airline like Delta,” concluded the businessman.

According to GayStarNews, Alaska Airlines issued a statement acknowledging the incident:

When boarding flight 1407 from JFK to LAX, a couple was mistakenly assigned the same seats as another couple in Premium Class. We reseated one of the guests from Premium Class in the Main Cabin.

We are deeply sorry for the situation, and are investigating the details while communicating directly with the guests involved to try and make this right. Alaska Airlines has a zero-tolerance policy for discrimination of any kind, and our employees value inclusion for our guests and each other.

Was this a case of placing a straight couple’s ‘couplehood’ over a gay couple?

I don’t know the answers to those questions, but I’ve reached out to both Mr. Cooley and Alaska Airlines for any further details.

In the past, Alaska Air has shown support for the LGBTQ community. In 2015, the airline offered several discounts timed to coincide with Pride events. And, the airline’s official website has a dedicated section for LGBTQ travelers.