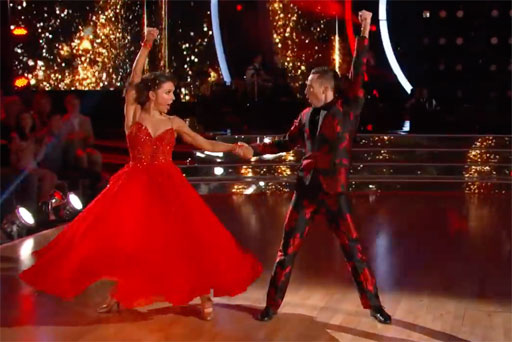 In the pre-performance video, Rippon shared that his grueling ‘Stars on Ice’ tour schedule has him flying all over the country while Johnson travels with him everywhere to rehearse.

The Olympic bronze medalist says he doesn’t get back to L.A. until the day of DWTS tapings.

But a busy schedule and sleep deprivation did not stand in the mighty Rippon’s way.

Set to “Make Way” by Aloe Blacc, the duo delivered near perfection receiving 37 out of a possible 40 points. That made for a tie, with skating pal Mirai Nagasu and her pro partner Alan Bersten, for the night’s high score. 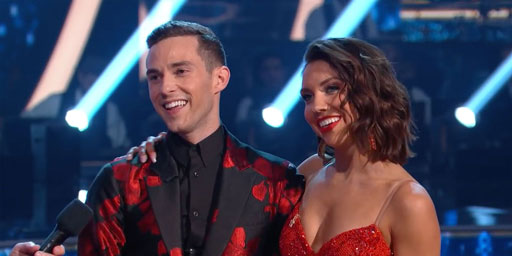 Bruno Tonioli: “No messing around, no distractions! Absolutely fantastic dancing all the way through. Your timing is impeccable.”

Len Goodman: “So much content, so much speed, but so much clarity of movement. Well done!”

“That was stunning, said guest judge Rashad Jennings. Although Adam’s snazzy red/black suit took the former NFL player aback: “This outfit though. Did you pick this outfit?”

“I actually stole it from your trailer,” said Rippon without missing a beat. “We’re the same size. Nobody knew that.”

After the performance, Rippons told Fox News his new Finnish boyfriend, Jussi-Pekka Kajaala, will be moving from Finland to Los Angeles to be with him.

“I live here in L.A. already but he’s in the process of moving here. He lives in Helsinki right now,” Rippon explained.

I literally learned to dance to this song.

And how about Adam snagging that football pass like a pro? Watch below.