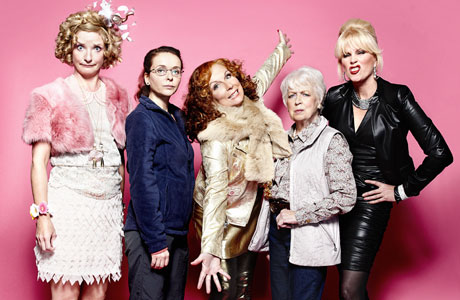 From BBC America: The dames of debauchery are back, dahlings. Those booze-swilling besties Edina (Jennifer Saunders) and Patsy (Joanna Lumley) will be returning to our screens in three new Absolutely Fabulous specials.

TV Guide has announced the premiere date of the first special: Sunday, January 8 at 10/9c on BBC America.

The entire main cast — including Julia Sawalha as Saffy, June Whitfield as Mother, and Jane Horrocks as Bubble — will reprise their roles in the new episodes marking the show’s 20th anniversary. TV Guide reports that, in the premiere, one of the girls returns with “slightly scary new best friend” and “Bubble re-enacts the royal wedding.”

Get out the Bollinger!