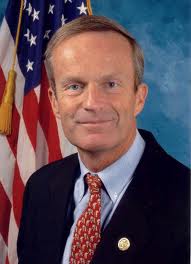 From JoeMyGod: Rep. Todd Akin (R-MO) has issued a letter calling for on-base gay weddings to be specifically banned in the Senate version of the National Defense Authorization Act. Eighty-six members of the House have co-signed Akin’s letter.

“The Defense of Marriage Act was passed by a bipartisan vote in Congress and signed into law by President Clinton,” said Congressman Akin. “Unfortunately, this current administration is now directing the Department of Defense to ignore this law and perform gay marriages on military bases. I think this is wrong, which is why I offered an amendment to the House-passed defense bill making it clear that DOMA applies to the DOD. This letter calls for the Senate to add a similar amendment to their version of the bill. The Department of Defense should not be allowed to simply ignore laws they do not like.”

It will surprise no one that the list includes the usual suspects like Michele Bachmann, Steve King and Allen West, to name a few.