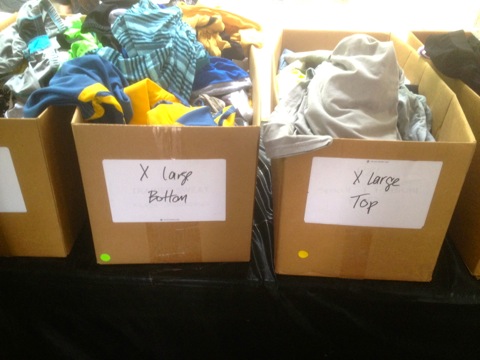 Great thing about Pride in Vegas is we get to see tons of friends in one day, plus take in all the booths from LGBT and LGBT ally groups & businesses. Huge corporations, small business owners, churches that welcome LGBT community members in their faith, social groups – many, many take part in sharing what they have to offer to the Las Vegas community.

One example I will list is LGBT owned and operated N2N Bodywear, based in Los Angeles but comes to Las Vegas every year to take part.  Out and proud owner/designer Andrew Makay is a business success story that makes me proud to know him.  And his energy at Pride events across the country is infectious to all who stop by to check out the sexy clothes (and models) on hand.

And the entertainment was terrific. I have to say my favorite act, who had the entire festival on it’s feet had to be God Des And She. A pop/rap act, they did original and cover songs that completely rocked the place. Pride organizers take note – book these two talented women and your crowd will thank you.There were also many other terrific performances, too long a list to name, of LGBT favorites from Las Vegas and around the world.  Just know that Entertainment Director Brandon Johnson did a terrific job bringing something for everyone, and the crowd had a great time all day long.

The headliner for this year’s festival was Bleona, known as the “Madonna of Albania.” Very talented and brought four terrific back-up dancers who knocked the choreography out. I hope to see Bleona do more as she’s breaking into the US market. And she’ll definitely have a big audience with the LGBT folks.  There were some production delays with her crew setting up that caused Bleona to take to the stage 15 minutes late.  With an already factored in 20 minute break from the previous act, there was a 35 minute lull in the entertainment for the crowd. I watched dozens of attendees leave after a while, and I also felt some of the momentum in the crowd diminish due to the delay. My unsolicited but constructive advice to Bleona – I appreciate you want to put on a big show for the crowd, but I’d scale back a bit so you can hit the stage on time and keep the energy of the crowd on your side.  A talented performer, I look forward to seeing what’s next for Bleona in the US.

I have to mention the amazing Chris Saldana, one of Las Vegas’ favorite news anchors/reporters. Chris never fails to show up, support and do whatever needs to be done for the LGBT community. Whether it’s hosting the Pride Parade telecast, hosting throughout the day on the Festival stage or jumping in to help Bleona’s crew get set-up, this Emmy Award-winning journalist does the gays proud. Las Vegas is lucky to have someone who gives so much throughout the year.

Here are a few pics from throughout the day at the 2013 Las Vegas Pride Festival: